So, this might seem somewhat astute, but the power of God amazes me. And here is what I mean by that. Yesterday at church, my pastor was talking about if you want to hear God speak to you, look at how he has before. Well as he said that, I started talking to God in my head. Mind you, to the average onlooker, I looked deep in concentration on what my pastor was saying, but really, I was having a one on one conversation with God.

Now, if you have read this blog much, you know that I talk to God pretty bluntly. I mean, he knows what I am thinking anyway, so might as well be brutally honest. And it’s kinda funny, everytime I start – I try to start eloquently – but that quickly fails – and I am back to being blunt. And I guess in a way I was accusing him. Asking him, why isn’t it so plain to me like it seems to be for everyone else. I began to rationalize to him – I believe in you, you know that, so can you make this easier? I want to do your will. I don’t know what it is, but I want to do it. Just show me – text me – call me, I promise I won’t tell anyone. (Yep, I really thought that – not schizophrenic, just thought it might be easier, ya know?) I couldn’t understand why it seemed so clear for some and not me.

Then in my head popped up the book, the blog. And I said to him, and I am quoting my thoughts/prayers here “Is this you popping this in my head, because I want to write and blog? Because sometimes I don’t want to. Sometimes it feels like a chore – and I do the ‘I will do it later’. Or is this a gift that you have given me, and I will never be completely satisfied until I do it? I DON’T KNOW! (Yes, I was screaming in my head.) I mean, I have been through a whole lot. Can you cut me a break? I need a break. I need this to be a little easier. A little plainer. “ It went on and on. I blamed him for making me a widow, then thanked him for giving me faith and comfort through it all. I accused and praised – it was pretty intense in my head. I asked him to show me plainly. Something to where I knew it was him, and no one else.

So, I get on facebook – and I have a friend request from someone I don’t know. And then I noticed I had a message from the same someone. And she tells me to read what she put on her facebook wall. And I did. And well, I guess God has a sense of humor- but he spoke loud and clear to me. This sweet woman stumbled upon my blog, and her first line, “I don’t believe in coincidences.” I had discussed that with God earlier. Was all this a coincidence with the writing. Guess he was telling her through me – “Nope. No such thing.” So, Wendy, as ou thanked me for the blog, let me thank you – You helped me. More than you could know. I cry while I write this, because a new peace is found in myself. I know that the creator of the sun and stars, can hear little old me. He loves me. He wants me to obey him, and I am not as insignificant as I sometimes feel. He loves and cares for me individually – and that he has a sense of humor about the whole thing. And he gave me a cross to bear, a story to tell, and I will continue to do it with thankfulness and honor – for the gifts he’s given me. My God is wonderful. I can’t say it enough – loud enough – long enough. 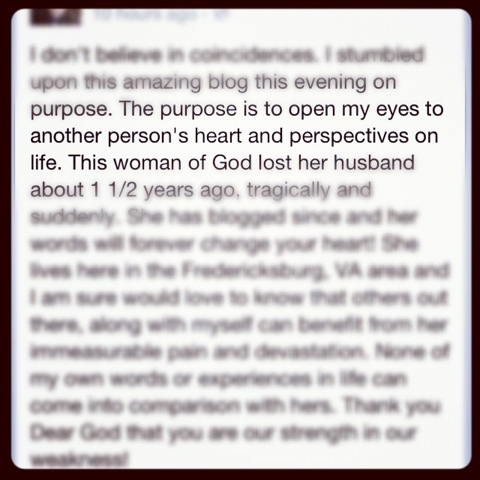