First, if you read this – please share it – post it… get it at there.  I want to see what it takes to get AT&T to stand up and do the right thing.  Because so far they haven’t.  Here’s the story…..

A week and half ago, I ordered two phones online.  A completely efficient, smooth, and frankly easy process.  At least, that is what I thought.  Two days later, I receive an email telling me the phones had shipped.  I was stoked!!!!  So much faster than I what I had anticipated.  Now let me backtrack a little bit.

When I checked out – AT&T informed me that there would be a signature required for the phones.  So it gave me an option to have a different shipping address.  Being a working mom, and appreciating the information- I chose to have the phones delivered to my place of employment.    Smart, right?  I thought so, too!  I mean, there is always a receptionist at the front – and this place is constantly full of people.  No way, no how, these packages could not be signed for – and… we know our FedEx guy – see him all the time, and he is mad cool.

On Monday, I check to see if it’s gonna be here so I can alert everyone that if they get the phones – put them in my office.  And what do I see?  Delivery exception – returned to sender.  What!?  Why?  I was confused.  No email from AT&T with a problem, so I call FedEx.  They tell me, AT&T requested the order to be returned.

So, I call AT&T.  And the nightmare begins.  Day one – total time on phone?  Over 4 hours.  95% of that time – being on hold.  And no one knew why they were returned.  So, they would tell me that they were gonna figure it out – asked me if I would mind to hold – I agree… and 2 minutes later – a cold transfer.  I was dumped back into the phone que.  Now, I will say, every single person I spoke to, was kind.  Just had no follow through.  I end up at a call center, where it was scripted.  I understand that the guy on the other end, doesn’t get a lot of what I am saying – so I just answer his questions, he gives me an escalation #, and states that someone will contact me within 48 hours.

I facebook AT&T.  I tweet them.  And to my surprise – I get a response!  Ask me to email information to them – and I did it right then.  They tell me that they will contact me asap.  FYI – STILL NOTHING FROM SOCIAL MEDIA GUY.

Nothing.  So I call again.  I am apologized to, and assured I won’t be dumped into a phone que.  What happens?  Dumped.  Each department thoroughly explains how I shouldn’t have been transferred to them – and promises to warm transfer me to the right place.  Doesn’t happen.  Nothing.  Finally, I get a supervisor – after persistence.  She does what she can. Then I am once again transferred to sales to resubmit the order.  It must go to my home address, but whatever – It’s for a birthday present – and I will stop the delivery to pick it up at the FedEx place across the street from my job.

But here is what gets me.  It took hours of my time – to correct a mistake.  I spend way too much money on cell phones – but I have teenager and a tween, and myself – so, it’s steep.  I pay my bill each month.  I just want what I asked for.  And I want them to do what they say that they will do.  A survey company called me, and refunded my bill 80 dollars.  A survey.  Not anyone from management.  And the girl on the survey end, was mortified, and stated “More should happen, but this is all I am allowed to do.”  And I appreciate it – But I think they need to step up.  Answer for it.  My kid wanted an iPhone for her birthday.  I wanted to surprise her with it. Now I can surprise her with a pic and say… “It’s coming.”  And it isn’t about the thing.  It’s about doing what you say you will do.

If you say you will call – do it.  So AT&T – Man up.  I am including just some frustrated screen shots below… Just so you know I am not crazy. (*I never raised my voice to one person, Pull your phone logs AT&T… I apologized to the rep b/c it was mess.) 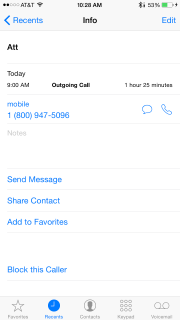